On Monday afternoon, the story of an extraordinary discovery began to unfold, at the bottom of a damp pit in a field in Broadway, southeast Worcestershire.

There was little about pit [1412] to distinguish it from the hundreds of other features across the site. A dark brown oval stain about 1.5m in diameter, it only revealed its secrets as archaeologist Jamie reached the base, and caught the first glimpse of what turned out to be a beautiful early Bronze Age ‘Beaker’.

First glimpse of the Beaker

I’ll be writing more on this discovery over the coming months. But for now I’d like to explore how it was found and excavated, and why we broke a golden rule.

In archaeological language, pit [1412] is a discrete feature, separated from its physical neighbours and contemporary features by the sands and gravels that lie below the levels of human impact. This pit was formed by the act of digging a hole, cut deep into the underlying gravel. What we see, therefore, is the stain where the fill – the material that went back into that hole to fill it in – differs from the material that came out.

The approach usually taken for a feature of this kind is to half-section it. This involves stringing out a line, usually along the longest axis, and excavating 50% of the fill up to a clean vertical edge – the section – which is then inspected, photographed, drawn and surveyed. This gives us an opportunity to unpick exactly how the feature came to be filled in. Was it filled in rapidly with the material that had been dug out, or with refuse? Did it silt up over decades or centuries with rich organic silts? Are there signs that it was re-cut or cleaned out? It also enables us to make a decision on a feature’s significance. Is it worth excavating the other half? Or, with time and budgets limited, would that effort be better spent on another feature?

In the case of [1412], there are some unusual elements that suggest there may have been several episodes of activity. More on that in a future post! But as Jamie reached the base of the pit, he spotted a chunk of decorated pottery, located right in the vertical section. After careful cleaning, it was clear that this was the base of a prehistoric pot. WhatsApp messages pinged back and forth from site to office, and as the horizontal bands and chevron patterns were revealed, it started to resemble an early Bronze Age Beaker.

Jamie and site director Richard instantly realised the significance. Although there was no trace of any bone, Beakers are almost always found associated with burials, and are often accompanied by specific types of artefacts. I fired off a list to watch out for – barbed and tanged arrowheads, flint knives, stone bracers… Jamie carefully cleaned around the protruding pot, and recorded the section. 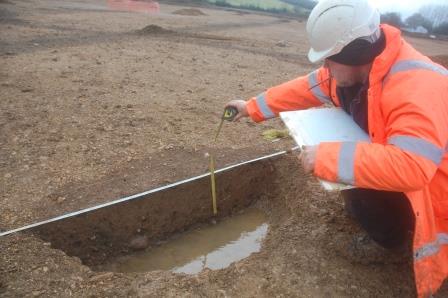 Now came the tricky part. Conditions were wet, and the groundwater rising. Exposed, the pot was vulnerable. Only a couple of hours of light remained. Richard and Jamie still had no idea if the pot was intact, how large or delicate it was, or even whether we were just looking at redeposited fragment that had found its way into the pit from elsewhere.

Passing judgement on each other’s excavation techniques is something of a universal pastime among archaeologists. And field archaeology has its golden rules, drummed into every undergraduate student or willing volunteer on their first digs. “Never stand on a trowel-cleaned area”. “Trowel with the edge, not the point”. “Always work from the known to the unknown”. And crucially, “Never go digging into the section”. Don’t chase the root, or the bone or the fancy bit of pottery – leave it in section, record it, then it can come out in good time when you dig the rest of the feature from the top.

Wow. Hot off the trowel – our archaeologists have made a spectacular discovery this afternoon. Here’s a sneak preview… a #BronzeAge beauty pic.twitter.com/9Llz4MtgcW

The video we posted on Monday showed Jamie cutting back into the section to expose the extent of the pot. Some people were horrified, and vocally so. Some doubted our competence, others our ethics. We broke that golden rule. Why?

Every competent archaeologist knows the rules. But a really good archaeologist knows exactly when to break them. The section had already been carefully recorded. Faced with rising water, fading light and a delicate vessel of unknown condition and size, Jamie and Richard chose to dig around the pot. They established its position and size, and found it to be so delicate that excavating down from the top was likely to damage it further. They protected it, then carefully removed half of the remaining fill of the pit, leaving the pot exposed on the base. It was then photographed and surveyed, before being expertly lifted, held together by the claggy soil contained within.

With water bailed out and overlying soil removed, the Beaker is exposed for the first time

Sometimes it pays to break the rules. In having the experience and confidence to adapt, the excavators were able to safely recover a stunning find, and record the position of an array of other artefacts: arrowheads, knives, an antler implement… it has all the hallmarks of a Beaker burial, but no bones. Why? We hope to find out. Watch this space!

[For more information as the excavation and analysis progresses, keep an eye on the blog, facebook page & twitter]